Book Updates are included in - WorldatWork Journal Q3 2019 Article: Gender-Based Pay Equity Differences and Upward Occupational Mobility Through the Lens of Comparable Worth The Journal Article can be downloaded in PDF format here.

Posted by rcbobhughes at 7:30 PM 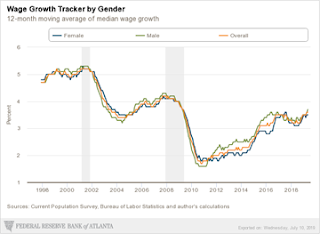 The Federal Reserve Bank of Atlanta Wage Growth Tracker segregated by Gender based on the 12 month moving averages indicates that from 1997 to the present the overall average Wage Growth Rate for  Females was 3.5% and for Males 3.6%.

Given the findings in my recent book Human Capital Systems Analytics and Mining that for nearly all GS Pay levels in the Federal Government there are virtually no differences between Genders with regard to pay, except at the highest compensation levels.


Based upon the consistency of virtually equal Yearly Compensation Gains across Gender as shown in the Wage Growth Chart since 1997 it may be assumed that Pay Differences between Genders has been largely overstated for the last two plus decades for all job levels below upper management and executive.

In Contrast to the Gender view to the Wage Growth by Age is much different.  Using the same Wage Growth Tracker noted above the 12 month moving averages indicates that from 1997 to the present the overall average Wage Growth Rate for the 16-24 Age Group was 6.7%, for the 25-54 Age Group 3.6% and for the 55+ Age Group 2.4%. 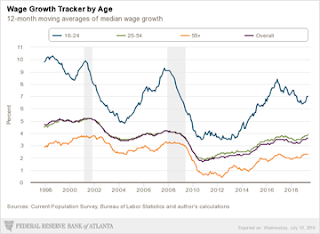 In terms of Wage Growth it is evident the the biggest disparity is not between the Genders but instead across Age Groups.  The most negatively affected are individuals in the 55+ Age Group.  Pay discrimination based on Age is what should merit the most scrutiny and attention.

The importance of research in Pay Discrimination based on Age is underscored due to the fact that individuals are living longer and more depend on some level work during retirement.
Posted by rcbobhughes at 10:37 PM

Upcoming WorldatWork Journal Article on Pay Equity and Comparable Worth

An upcoming Article entitled Gender-Based Pay Equity Differences and Upward Occupational Mobility Through the Lens of Comparable Worth, will be published in WorldatWork Journal, Third Quarter 2019. The article updates research and contains excerpts from the book Human Capital Systems, Analytics and Data Mining (CRC/Taylor and Francis).
Posted by rcbobhughes at 6:30 PM

Detailed Tutorials cover Human Capital Databases from Relational to Dimensional which are then exposed to in depth Online Analytical Processing (OLAP) and Data Mining Projects.  Coverage of Compensation Systems include Extensive Original Research in Gender Based Pay Equity Issues through the lens of Comparable Worth.  Replication of the Pay Equity research with New Findings is included in Tutorials throughout the text.

Development of OLAP Databases and Human Capital Data Mining Projects further exploring contemporary Human Capital Research are the main focus of the book.  Also included are development of Human Capital Information System Interactive Dashboards that effectively visualize recommended internal research methods along with detailed Tutorials on how to create and maintain the Dashboards.  Dashboard development are mainly concentrated on Compensation Metrics and Analytics.
Posted by rcbobhughes at 4:42 PM

Korn Ferry Study: Women earn 98% of the wages of men. No Gender Wage Gap when jobs are the same.

According to a recent article in Economist.com Women do earn about the same as men when jobs are equal. In the article the Economist reports that according to data from 25 countries, gathered by Korn Ferry, "women earn 98% of the wages of men who are in the same roles at the same employers".
This would seem to indicate that when Gender Pay Gap studies are viewed from a high level, not taking into account Comparable Worth of jobs, that the differences must be distorted by Occupational Career Level Differences rather than discrimination when jobs are the same.

More recent research by this Blog Author in a new book Human Capital Systems, Analytics and Data Mining to be published Spring/Summer 2018 does find that Gender Based Upward Occupational Mobility Issues are the true base issue when examining Gender Based Employment and Pay Status Progress.

According to the National Bureau of Ecomonic Research (NBER) in their 2017 published study Understanding the Economic Impact of the H-1B Program on the U.S. wages for Computer Scientists would have been 2.6% to 5.1% higher from 1994 to 2001 had it not been affected by immigration permitted under the H-1B Visa Program. The study also finds that employment for US Workers would have been 6.1% to 10.8% higher in the same period if it not for the H-1B visa program.

The overall opinion of US Tech workers, while generally strongly supportive of diversity in Science and Technology Careers in US companies is that the H-1B Visa program has limited opportunities in those career fields for US workers and has kept salaries suppressed. The ongoing controversy of the H-1B Visa Program could be moderated by stricter standards for administration to insure that the program is not used for importing cheap labor and that qualified US citizen workers are given priority in hiring and promotion especially in Federal, State and Local Government including public colleges and universities.

Oregon’s new minimum wage law effective July 1st schedules wage increases July 1, 2016 for the next six years.  The law requires Portland Employers to provide a minimum wage $2.25 an hour higher than the minimum wage for non urban countines. This tiered approach is nonsensical at best in that naturally occurring Geographic Wage Differentials  between metro and non metro areas have existed for decades in every state for most occupations.
Many consulting firms have offered for years Geographic Salary Differential studies outlining salary differentials for jobs between different Geographic Locations.  One of the most in-depth reports is the CompGeo Online Professional Geographic Differentials Report  which contains analysis with drill down to the Job Family Level not found in other such studies and is updated yearly.
The artificial differential in minimum pay rates enacted in Oregon ignores the reality that Geographic Salary Differentials occur as a matter of course due to local cost of living differentials, demand for labor and other economic variables.  This ill conceived law will undermine and upset business planning and competitiveness across Oregon and will eventually lead to for profit enterprises being at a severe disadvantage when compared to other states without such unrealistic and anti-commerce wage limitations.
Posted by rcbobhughes at 11:22 PM